Check out these 5 facts about the Roman Palace which doubles as Split’s city centre.

If you ever find yourself in Split, you can’t miss exploring one of the best-preserved examples of Roman architecture in the world. The UNESCO heritage site will enchant you with Egyptian sphinxes, Corinthian columns and ancient walls filled with life.

Take a look at the fun facts about the magnificent Diocletian’s Palace!

It was built as a retirement residence for the Roman emperor.

The construction of the Palace began in the year 298, after the Roman emperor Diocletian won a battle with the Egyptians. He chose this location because of its proximity to Solin, the then-capital of the Roman Dalmatia province (which later became a part of Croatia). Diocletian abdicated in 305 and moved to the Adriatic residence with his family, servants and members of the military. Unfortunately, only 6 years after the move, the emperor died and the years of many transformations of the Palace began.

A majority of the interior isn’t from the Diocletian’s time.

Over the years, many parts of the Palace were changed or repurposed. The mausoleum was converted into a cathedral, the basement turned into a garbage dump, and small churches, family palaces and residences were built inside the ancient walls. However, the original quadrant layout remained the same, as well as the gates (Brass, Iron, Golden and Silver Gate) leading up to the Peristyle (the courtyard). 50 years ago archaeologists began excavating the impressively intact basement, finding evidence of daily life as it once was.

The Palace is still used today.

Today, more than 3.000 people live and work within the Palace. There are apartments, museums, markets, coffee shops and boutiques which attract locals and tourists each day of the year. It’s not unusual to hear street artists playing their tunes or see kids playing soccer in the courtyards, while others enjoy their coffee or local food. While you’re there, don’t miss the vast underground vault where locals sell their arts and crafts.

Game of Thrones was shot in the Palace.

Game of Thrones fans will be happy to hear that Diocletian’s Palace doubled as the city of Meereen on the popular TV show. If you watched season 4, you probably saw Daenerys Targaryen’s grand-looking Meereen throne room and the slaves of Meereen contemplating whether they should turn against their masters. The scenes were shot in the catacombs and hallways underneath the Palace.

You can see some parts of the Palace for free.

There is no entrance fee for the Palace’s Peristyle, the Vestibule (the antechamber) or the gates, so you can roam around the cobblestone alleys, hallways, shops and cafés for free. However, Diocletian’s Palace Underground, Cathedral of Saint Domnius Treasury, Split Bell Tower and Split Jupiter Temple do require a ticket, which you can purchase at the entrance. The Palace is one of the best-preserved pieces of ancient architecture in the world, so we recommend you check out at least one of these sites. 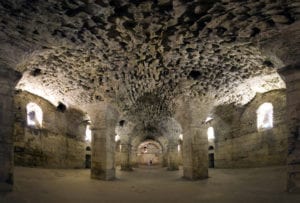 Besides spending a day at the Palace, there are plenty of other sites to explore in Split, but also the rest of Dalmatia. Check out these must-sees in 2020 and start planning your next trip!